The Bishops and the golden calf

‘When the people saw that Moses was so long in coming down from the mountain where he was talking with God (who they’d all begun to feel was a bit of a killjoy), they gathered round Aaron and said, “Hey, make us some gods who are a bit more understanding and in our own image, and who won’t keep on trying to stop us having fun.”
Aaron answered them, “Okay, if this is the democratic will of the assembly, bring me all your gold earrings and jewellery and I’ll make a new idol for us all to worship, more in step with current practice.  Because I agree, Moses has got behind the times, and I support this change not in spite of being a prophet of Yahweh – but because I am a prophet of Yahweh.”
So they brought him all their precious golden objects and over the next couple of days he knocked up a really impressive idol in the shape of a giant calf.  And when he showed it to the people they were really impressed and said, “Wow, now that really is an object of worship!”  And they fell down and touched their foreheads to the ground.  Then afterwards they sang songs and had a huge feast, and got very drunk.
Later that same night, Moses came down the mountain with the two tablets of the Testimony in his hands that the Lord had given him, instructing the people on how to live in ways that would keep them safe and bring prosperity.  The tablets were the work of God; the writing was the writing of God.  When he got to the camp, Aaron and a delegation came out to meet him, and they said, “We don’t want those tablets, Moses, because the rules are repressive and stop us being true to our inner and immutable nature.”
Moses replied, “But these tablets are the word of God, given so that you can flourish and be happy, transcending your baser instincts in order to become fully the people you are meant to be.”
“No,” they replied.   “That’s cloud cuckoo land.  We can’t change – we are those instincts, and we want to be true to them.  We want to be free to have unrestricted sex with our neighbours, our men and maidservants, or our oxen and asses, whenever we want.  We want to end damaging repression, and teach our children that they too are sexual beings from birth, with the right to have unrestricted sex with one another; with their neighbours; and with the manservant or maidservant, or the ox or the ass of their house.”
Moses thought for a considerable length of time, perplexed in his mind how best to proceed, while all the people said, “Amen, and praise to the golden calf!”
And it was clear to Moses that, whatever God said, the will of the people was for the alternate morality of the golden calf, and the more he thought about it, the more he thought that maybe they were right, and that God was out of touch.   It was God, therefore, who would have to change.  So at length he said, “If this is the will of you all, then I agree, but to maintain the faith, I shall rewrite the rules.”
And all the people said, “Amen.” ’
On 6th June 2013, the Church of England announced that, since the clear will of Parliament is to allow same sex couples to marry, they will no longer oppose the redefinition of marriage, but instead concentrate their efforts on ‘improving’ the legislation.
On the same date, 69 years ago, at the start of D Day, the Allies landed  on the Normandy Beaches.  The operation, codenamed ‘Overlord’, was the beginning of the invasion of Europe, aimed at overthrowing Nazi occupation.  In the dark days at the beginning of the war, many in the cabinet had insisted Britain didn’t stand a chance, and that the wisest course was therefore to make some sort of ‘accommodation’ with Hitler.  Churchill heroically had stood out against all compromise and all pressure.  How different would our history have been, if he had given way?
In capitulating the way they have, the Church of England bishops have totally abrogated their calling as spiritual guardians, and betrayed the faithful witness of those men and women who have gone before, sometimes at the cost of their own lives.   If Moses, Elijah, and the prophets had adopted a similar line – and if Jesus, faced by current religious practice, had shrugged and said, “Well, there’s not really much we can do” – there would be no Christian faith today.

It is no part of Christian belief to seek relevance by submitting to the changing values of the world.  Rather, our faith requires all of us – and most especially our leaders – to stand on the truths enshrined in the Bible and make a difference.  We look to the bishops to provide a lead and defend our faith; not to compromise. 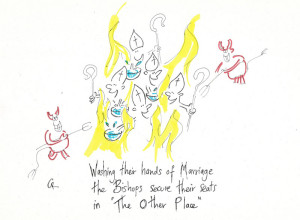